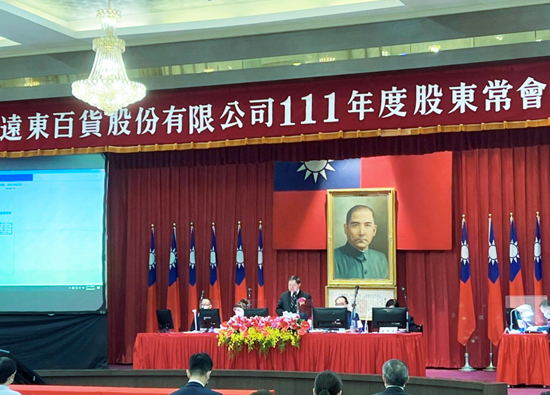 &nbspFar Eastern Department Stores held its annual general meeting of shareholders on June 24. Far Eastern Department Stores Retail Group will continue to create profits despite the challenges of the epidemic in 2021. The latest fifth-generation store, the Zhubei store, was put into trial operation in January this year. The characteristics of the experiential department store and the landscaping design full of artistic aesthetics have successfully attracted crowds, with more than one million visitors. In response to the trend of Sustainability Development at home and abroad, Far Eastern Department Stores Retail Group not only maintains good profitability, but also strives to exert positive influence, strengthen the promotion of ESG issues, and lay a solid foundation for corporate growth and sustainable operation.

As more and more people believe that new technology makes shopping more convenient, Far Eastern Department Stores adopts two strategies of "digital marketing" and "offline experience" to create a virtual and real retail environment that meets customers' needs. At the same time, the consumer base is gradually getting younger, and it is observed that the new generation of consumers likes to share and use social media and apps frequently. Therefore, Far Eastern Department Stores accelerates digital transformation and digital innovation, and operates through creative and interesting audio-visual content. Community, establish a new communication channel with the new generation, the average number of visits to the community has increased by 50%, and the interactive sharing rate has increased by 40%. Not only that, the Far Eastern Department Stores App has also been revised and upgraded, with new functions to capture the needs and preferences of customers, and the number of daily openings has increased by 763%. The department store app is the second most commonly used.

In addition to adjusting the operating model, the Far Eastern Department Stores retail system also adheres to a diversified business strategy and seeks new investment opportunities. In Taiwan, following the successful opening of the store in Zhubei, the first-generation store - Baoqing store has been renovated, and world-renowned architects have been invited to build a high-standard new-generation green department store and renovate the urban landscape of the western district of Taipei. It is expected to become a new landmark in Ximending; while in the mainland area, it will continue to increase investment and evaluate the development benefits of various regions. Among them, Chongqing Loncin Shopping Center is expected to open in 2023, with a shopping mall area of 80,000 square meters, increasing the business area in the mainland by 60%, creating a new landmark for mid-to-high-end consumption, and the growth momentum in the mainland is expected to double.

Far Eastern Department Stores promotes ESG for a long time and enhances the sustainable competitiveness of enterprises. In terms of social and corporate governance, it has invested in more than 2,100 public welfare activities in the past five years, and has been ranked among the top 20% companies in the "Corporate Governance Evaluation", striving to create the highest value for shareholders and the society; in terms of environment, it is expected to be net zero in 2050. Emission target, Far Eastern Department Stores is committed to energy conservation and carbon reduction. In the past 5 years, while the turnover has grown, the electricity consumption has decreased year by year, and the electricity consumption per NTD1 turnover has been reduced by 11%. In three years, additional solar energy equipment will be installed in Taitung and Hualien, with an installed capacity of 1,600 kW and an annual output of 1.14 million kWh of green electricity. It is expected to successfully reduce carbon by 30% in five years.