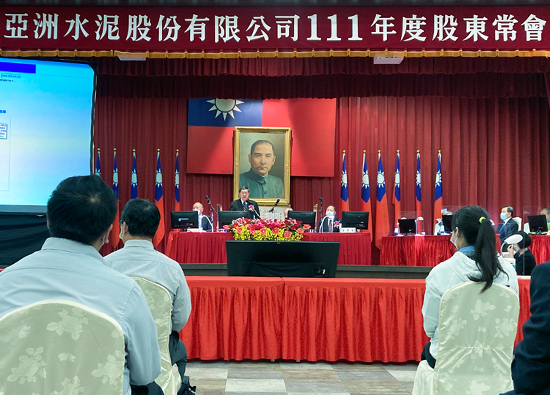 &nbspAsia Cement Corporation (hereinafter referred to as Asia Cement Corporation) held its annual general meeting of shareholders on June 29. Douglas Hsu announced to shareholders that Asia Cement Corporation's profit exceeded NTD10 billion for 4 consecutive years, and this year's cash dividend per share was NTD3.4. Dividend or share price are leading the industry, and the cash yield is 7%, much higher than the average level of Taiwan stocks; meanwhile, Asia Cement Corporation pays attention to environmental protection and energy conservation, fully promotes ESG, significantly reduces carbon emissions, and continues to increase investment in energy industries such as natural gas and wind power , transforming the traditional cement industry into a green energy industry, which not only allows shareholders to make money, but also contributes to the society and environmental protection, which is of great investment value.

Asia Cement Corporation also announced that it will promote the high carbon reduction cement product "Hydraulic Mixed Cement", which can reduce carbon by up to 50%. In the future, it will combine the existing cement and limestone cement to become the three main products in the era of carbon reduction; Ya Tung Ready-Mixed Concrete Corporation, a subsidiary of Asia Cement Corporation, also leads the industry and has obtained the carbon footprint certification of green concrete building materials, gradually moving towards net zero emissions.

The consolidated operating income of Asia Cement Corporation in 2021 is NTD89.65 billion, and the consolidated operating profit is NTD17.68 billion. In addition, in the reinvestment business recognized under the equity method, companies such as Far Eastern New Century Corporation, U-Ming Marine Transport and China Shanshui Cement performed brilliantly, with an investment benefit of NTD6.31 billion and a consolidated net profit after tax of NTD17.52 billion. Attributable to the owner of the company NTD15.06 billion; and the profit distribution plan of cash dividend NTD3.4 per share was also approved by the shareholders' meeting.

Asia Cement Corporation (China) will also grow in 2021, producing 24.48 million metric tons of clinker, and selling 29.83 million metric tons of cement, clinker and slag powder in total, an increase of 2.22% over the previous year, and the net profit after tax attributable to the parent company is NTD76. 700 million, Asia Cement Corporation and its subsidiaries have recognized investment interests of NTD5.52 billion.

Looking forward to the cement market on both sides of the Taiwan Strait, Douglas Hsu believes that although Taiwan is still facing a shortage of workers in construction, coupled with the impact of the epidemic, inflation and interest rate hikes, and government regulation of the housing market, the demand for cement for new residential buildings has weakened, but the implementation of public works. With the support of Taiwanese businessmen and the expansion of investment in the technology industry, the factory office has driven a substantial increase in the demand for surrounding construction, so the total demand for cement throughout the year should still increase compared to last year. In mainland China, with the unblocking of the epidemic and the continuous staggered production and reduction and replacement policies, the market supply and demand will gradually become more balanced. In addition, the local government has considered economic growth and has begun to create financial easing and loosen real estate restrictions. There are opportunities in the second half of the year. Due to the emergence of deferred demand, the volume and price of cement have risen, and the operation is expected to increase quarter by quarter.

Asia Cement Corporation not only strives for profit, but also pays attention to environmental protection! Douglas Hsu said that Asia Cement Corporation promises to be a green leader in the cement industry, introducing a "resource-sustainable" recycled economy, using recycled waste to replace cement raw materials, assisting local governments, governments and related industries to meet the needs of all walks of life for waste disposal , to create a win-win situation for the environment, society and economy.

In the environmental and sustainable ESG era, in addition to launching low-carbon cement, Asia Cement Corporation also reduces greenhouse gas emissions with a positive and pragmatic attitude, and is the fourth company in the world to take the initiative to commit to the international "Science-Based Reduction Target Initiative (SBTi)" in well Cement companies that set carbon reduction targets under the scenario of below 2°C; Asia Cement Corporation Hualien Plant won the “Voluntary Energy Conservation and Carbon Reduction Excellent Manufacturer Award” for the seventh time in 2021 by the Ministry of Economic Affairs.

Douglas Hsu emphasized that in the future, Asia Cement Corporation will continue to strive to upgrade smart production, promote the recycled economy, implement net zero emissions, and move towards the ESG goals of environmental sustainability, social inclusion and corporate governance.