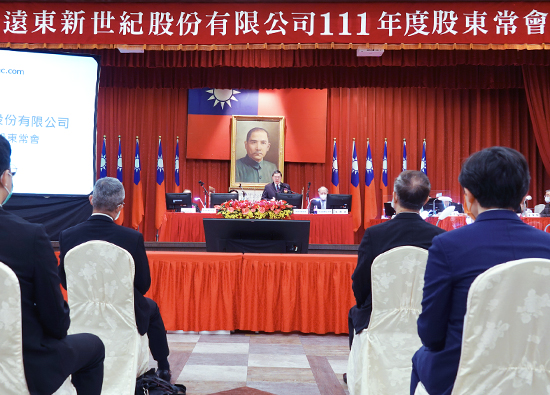 Far Eastern New Century Corporation（hereinafter referred to as “FENC” or “the Company”）held its 2022 Annual General Shareholders’ Meeting at the Taipei Hero House auditorium at 9:00 AM on 30 June with Chairman Douglas Tong Hsu presiding. During the meeting, the management team reported the 2021 financial results of the Company’s three major business segments – production, investments and property development, and also directions for its future development.

FENC navigated the turbulent waters of the COVID-19 pandemic with agility, adjusting business strategies rapidly and effectively. FENC’s 2021 consolidated revenue grew by 15% to NT$238.8 billion（US$ 8.52 billion）. Net income attributable to shareholders of the Company grew by 20% to NT$9.68 billion（US$ 345.5 million）, or an EPS of NT$1.94（US¢ 6.93）. The cash dividend of NT$1.50（or US¢5.36）per share was accepted during the meeting, which translates into a cash dividend payout ratio of 4.7%, based on the stock closing price on 29 June. As rising oil prices push up the Company’s product prices, FENC’s consolidated revenue reached NT$63.4 billion（US$ 2.3 billion）in the first quarter of this year, a record-high 13% growth year-over-year. Its net income attributable to shareholders of the Company in the first quarter of 2021 amounted to NT$2.75 billion（US$ 98.1 million）.

FENC is an active participant in the global campaign for carbon reduction, exerting itself to reduce GHG emissions by enhancing energy efficiency, seeking alternatives to fossil fuels, developing renewable energy, transforming raw material use and utilizing CCUS technology. With 2020 as the baseline, it plans to reduce emissions by 20% by 2025, 40% by 2030 and commits to achieving net zero by 2050. In 2021, in collaboration with a brand customer, FENC introduced to the market the world’s first-of-its-kind polyester fiber and fabric made from recycled waste gases emitted by steel mills, serving as the industry’s trailblazer in sustainability.

The Company focuses on developing cutting-edge products in green business, high-end auto materials, and hygiene and medical supplies and endeavors to broaden the scope of applications for its products. It has played a role in the supply chain for the global EV giant Tesla with airbag yarns and its polyester products have been used in the production of wind turbine blades. FENC spares no efforts in building a green supply chain, turning waste PET bottles into various applications, including new beverage bottles, clothing, footwear, packaging and auto materials. The Company currently ranks first in the world in food-grade recycled PET resins with its capacities being expanded in Japan, the Philippines and Vietnam.

The Company has established production sites in the United States, China, Vietnam, Taiwan, Japan and Southeast Asia. In Vietnam, capitalizing on the trade and economic advantages, the Company has built streamlined production lines, ranging from polyester resin, polyester staple fiber, weaving and dyeing to apparel. New capacities for polyester filament and recycled PET is planned to be added this year. The Company has also built a complete polyester supply chain in China and plans to invest in new expansion projects such as PET/ recycled PET resins and industrial fibers. Eyeing the massive domestic demand and cost advantages in feedstock and energy in the United States, FENC has acquired PET and recycled PET plants and has been building the largest integrated PTA/PET plant in the Americas to scale up its capacity.

The Company owns a total land area of 570,000 pings（1,884,306 m2）in Taiwan, most of which are located in premium areas across the north of Taiwan. Its flagship project, Taipei Far Eastern Telecom Park（Tpark）, is located in in the Banqiao District of New Taipei City. A new residential complexes project in Tpark is scheduled for sale in the fourth quarter of 2022, which is expected to bring in a significant income with its total floor area of 7,000 pings（23,140.6 m2）. Some office building projects in Tpark have completed construction and rented by world-class enterprises, including Google, which is stationed in TPK-D building — the largest hardware R&D center outside the U.S. A new building TPK-E is under construction but has been leased to a globally well-known company. As successive construction projects come towards completion, a considerable growth in rental income can be expected.

Another development project is for an old textile plant in Neili, Taoyuan City, with an area of 30,000 pings（99,173.7 m2）. The application for land rezoning has been approved by the local authorities. Land plans include residential, commercial, and medical districts and public facilities for arts and cultural purposes. Thanks to the property’s proximity to schools and the train station, its development promises to revitalize the community as a whole and deliver significant economic benefits.

The Far Eastern Group（FE Group）, with FENC as its parent company, has nine listed companies in Taiwan and Hong Kong. The total assets of the FE Group have reached NT$3 trillion（US$ 107 billion）, representing the second largest conglomerate in the non-tech and non-financial sectors in Taiwan. The FE Group operates businesses across a wide spectrum of industries, ranging from cement production, construction, department store retail chains, telecommunications, land and sea transport, to financial and banking services. FENC’s major subsidiaries are all industry leaders with proven track records of returns on investment. The market value of the Company’s investments at current stock prices exceeds NT$170 billion（US$ 6.1 billion）, about 1.1 times its book value. The potential gains of more than NT$90 billion（US$ 3.2 billion）translate into an increase of NT$17（US¢ 61）in net value per share, indicating a promising prospect of significant value growth.

FENC remains fully committed to sustainable development. As it works relentlessly to perfect performance in corporate governance, environmental protection and social charity, it engages in close communication with stakeholders to achieve good for all. The Company has been widely recognized for its sustainability practices. It has been included as a constituent of the MSCI ESG Leaders Indexes, FTSE4Good Emerging Index, TWSE Corporate Governance 100 Index and FTSE4Good TIP Taiwan ESG Index. In 2021, it won two medals in the first Taiwan Sustainability Action Awards and five titles in the Taiwan Corporate Sustainability Awards（TCSA）and most of all this year’s one-and-only GCSA Best Practice Award‒World Class‒Outstanding Practice with the Total Solution to Polyester Recycling. In 2022, FENC has been ranked in the top 5% of the listed companies in the Corporate Governance Evaluation conducted by Taiwan Stock Exchange for the fourth straight year, standing out as the only one in the industry that has earned this distinction. FENC won the “First Prize at Circular Sustainability” of the Annual CSR & ESG Awards hosted by Global Views Magazine.

Additionally, FENC was recognized in the second quarter of 2022 by Institutional Investor Magazine and Finance Asia respectively as Most Honored Company and Best Managed Company in Asia, the only Taiwanese company awarded in its industry.