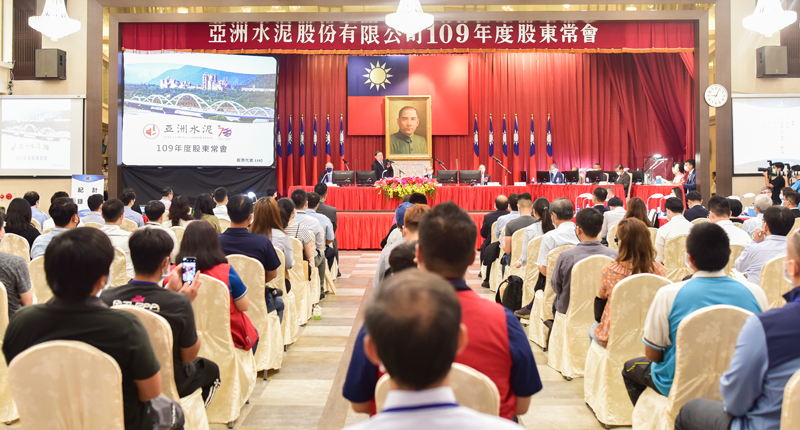 Asia Cement Corporation held the 2020 general meeting of shareholders on June 23, which was presided over by Chairman Douglas Hsu. The consolidated operating income of Asia Cement Corporation in 2019 was NT $89347637000 (the same below), and the consolidated operating profit was NT $22063176000. In addition, the reinvested enterprise recognized by equity method, FENC, U-Ming Marine Transport and Sunnsy Cement performed well. The investment profit is 5490375 000yuan, the net profit after merger is 22243953000 yuan, of which 17459673000 yuan belonged to Asia Cement Corporation. In the general meeting of shareholders, 3.0 yuan of cash dividend is distributed per share, and the cash yield is nearly 7%, which is far higher than the average level of Taiwan shares, making it valuable in investment.

Asia Cement Corporation (China) produced 24.84 million metric tons of clinker in 2019, an increase of 0.17% over the previous year; the total sales volume of cement, clinker and slag powder was 30.83 million metric tons, a decline of 0.39% over the previous year; the net profit after tax attributable to the parent company was NT $14106889000, and Asia Cement Corporation and its subsidiaries recognized investment interest of 1015696000 yuan in total, which is a new record in recent years.

Chairman Douglas Hsu said that Asia Cement Corporation Hualien plant strives to become recycled economy factory, from the perspective of local enterprises, it gives priority to the needs of Hualian County, assists operators in other counties and cities to recycle wastes, continuously implements the green sustainable homeland, and takes concrete actions to fulfill corporate social responsibilities. In May this year, it won more international recognition and became the first one in the global cement industry to obtain three international authentications, including recycled economy standard, as well as cement products carbon footprint and water footprint.

The second phase project of Chiahui Power Corporation reinvested by Asia Cement Corporation has a total power generation capacity of 1.17 million kilowatts, which will become the largest private natural gas power plant in Taiwan. It is expected to start ignition test in the fourth quarter of this year and put into operation next year, contributing to the stable power supply for Taiwan; Fu Ming Transport Corp. integrated land transportation and logistics business of the group. Yuan Long Stainless Steel Corporation has established a stainless steel logistics center in the Asia Pacific region by trading carbon steel, alloy steel, special steel and other steel products.

Demand is released due to the COVID-19, the price of cement is always high.

Look into the cross-strait cement market, Chairman Douglas Hsu said, supply remains exceeds demand in Taiwan cement industry, the impact of novel coronavirus (COVID-19) is relatively limited. The performance of Asia Cement Corporation is expected to be similar to last year’s. Although mainland is affected by the epidemic, work is stopped, which made the performance in the first four months is not as bright as that of the same period last year. But after May, the cement market in mainland entered the most prosperous period in the first half of the year. With the release of demand backlogged, the cement price began to rise. The overall profit of Asia Cement Corporation (China) is expected to stabilize quarter by quarter, and it is expected to continue the high price in 2019 and maintain a high price and profitability level.

Chairman Douglas Hsu said that regardless of the business environment, Asia Cement Corporation will try its best to adhere to the established production and marketing strategy, and adhere to the consistent policy of "high quality, high efficiency and high environmental protection".