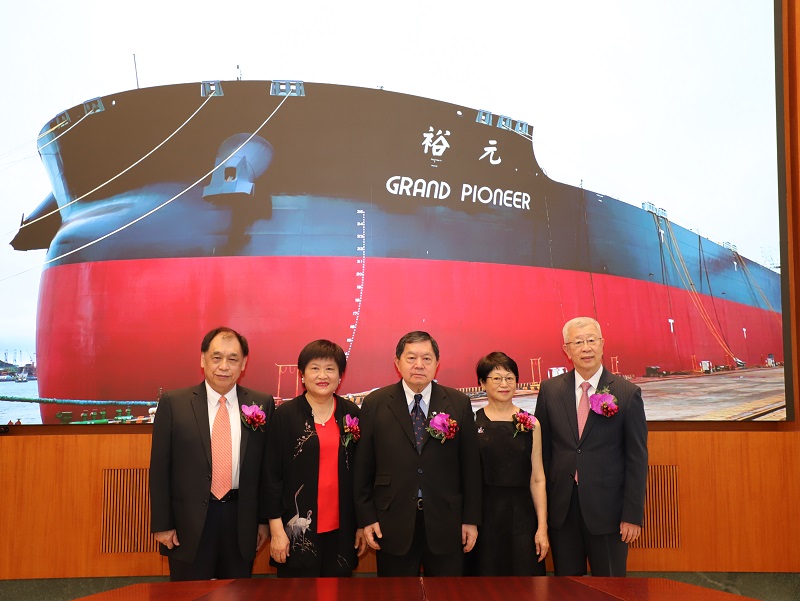 Leveraging on cloud technology, guests from both Taipei and Singapore offices were able to attend the ceremony simultaneously. This is also the Company’s first vessel’s virtual Christening ceremony.  Hosted by Mr. Douglas Hsu, Chairman of the Far Eastern Group, M.V. “Grand Pioneer” was named by Mrs. Chu Hsu, Mei-Lan, spouse of U-Ming Marine’s Independent Director Mr. Chu, Shao-Hua. The Christening ceremony was successfully completed at the virtual presence of Chairman Hsu, Mr. Chu and other guests. The vessel is expected to be delivered to U-Ming in mid-September.

M.V. Grand Pioneer has a length of 339.9m, width of 62.0m and a deadweight of 325,000 metric tons. She is the first VLOC built for U-Ming by Qingdao Beihai Shipbuilding to operate under the 25-year Contract of Affreightment (COA) awarded by Vale International SA of Switzerland (Vale), the world’s largest iron ore producer for transporting Brazilian iron ore to China.

Backed by our strong corporate value in pursuit of greener shipping, the vessel is built with the concept of energy saving and sustainability, equipped with the most advanced MAN B & W main engine, and embedded with LNG ready design concept, allowing flexibility to transform the ship into LNG and fuel dual fuel in the future.

U-Ming recognizes that after energy-saving eco-ships, the next industry trend and optimization opportunity will be the introduction of digital technologies such as the Internet of Things (IoT), Internet of Ships (IoS), and the “Smart-ship”.

In terms of sustainability and energy efficiency, the vessel is equipped with a SOx Scrubber, in compliance with the International Maritime Organization’s 2020 global sulphur limit. With its ultra-low fuel consumption performance and its EEDI standard above international regulations, U-Ming will be able to enhance its competitive advantage by providing green shipping to its customers with reduced greenhouse emissions.

The outbreak of the global pandemic in the first half of 2020 resulted in the sharp decrease in sea transport demand. The average BDI had decreased 23% to only 685 points, from 895 points in the same period of 2019. This period is being viewed as the most serious recession encountered in the past 35 years.

However, the bulk market has gradually recovered since June, and the freight indices of various vessel types have rebounded. In general, the third quarter will be the peak season for grain shipment in North America; and with the iron ore demand projected to grow at a healthy pace in China, the dry bulk shipping market is expected to recover in the second half of the year. The respective government’s response to the pandemic situation has also gradually become clear and started to actively revive the economy by expanding domestic demand and increasing investment in infrastructure construction which will ensure a sustained recovery in the dry bulk market.

Upon the delivery of M.V. Grand Pioneer, operations will commence under the contract with Vale to transport Brazilian iron ore to China until 2045; this will be followed by the company’s next VLOC which will be delivered by the end of this year. The Vale’s contract value is expected to be more than US $600 million which will help to increase the proportion of U-Ming’ long-term charter ships and create long-term stable cash flow and profits.

U-Ming avoids placing orders at the peak of the market and constantly renewing its fleet with environmentally friendly, energy-saving and digitalized capabilities to increase its market competitiveness thus able to boost the company’s financial performance.＃