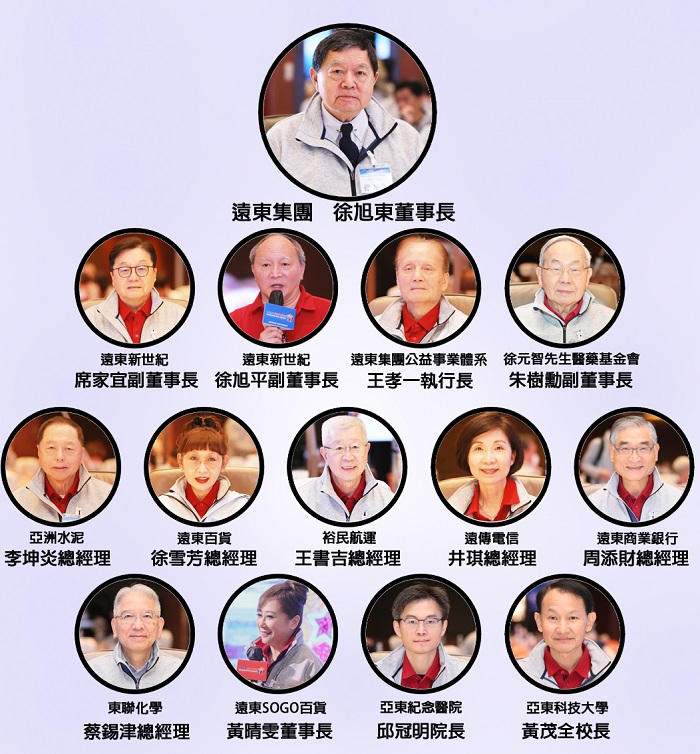 &nbsp2021 Far Eastern Group affiliated enterprise far Eastern Group annual strategy meeting will be held in Tainan, Far Eastern Plaza Hotel in two steps from December 1 to December 6. Affected by the covid-19 epidemic, the global people's livelihood consumption behavior and industrial business model changed sharply in 2021. The theme of this conference is "Mastering the new models" in order to grasp the trend, accelerate the transformation and continue to grow.

With the theme of Far Eastern Group's annual strategy meeting, the opening ceremony was delivered by Taipei Yuefu music banner art troupe with a shocking shock performance, a rhythmic performance, combined with the light and shadow effect of huge screens and ring lights, which injected full energy into the venue. Through video connection, the spirit of far Eastern's readiness and forge ahead was also conveyed to people far away in Taipei Colleagues from Hsinchu, Hualien, Jiangxi, Shanghai, Hubei, Sichuan, Suzhou, Vietnam and other places.

&nbspThen, with the title of "seize the opportunity to create a new situation", the organizer led everyone to look forward to the economic situation, review the group's business results in 2021, and look forward to the industrial trend in the post epidemic era. Although global economic growth rebounded strongly in 2021, it still faces problems such as supply chain shortage, inflationary pressure and climate change. For this reason, the Chinese mainland has accelerated the adjustment of its industrial structure, and has also actively developed a dual cycle growth mode, expanding domestic demand, forming a strong consumer market, and maintaining an open strategy to attract global resources. Although Taiwan has benefited from the global economic recovery, and its economic growth rate and export amount have reached a new high this year, there are still problems to be solved, such as increased geopolitical risks, opposition between political parties, five deficiencies in enterprise investment, marginalization of international trade and excessive concentration of major export industries. Douglas Hsu specially reminded that all enterprises should prepare as soon as possible and master supply chain restructuring Green economy, digital technology application, cross industry cooperation and creation of industrial ecosystem can create growth opportunities by accelerating transformation and building key competitiveness.

The special report of various industries is the key project of the annual far eastern group strategy meeting. This year, the core business body will report on the benchmarking projects that can strengthen competitive advantage in the next three to five years. Johnny Shih, vice chairman of Far Eastern New Century Corporation, led you to weigh the political and economic situation of major economic powers such as the United States, China, Europe and Japan, The key point of the industrial knockout is to point out the global COVID-19, lack of labor and lack of key components, logistics supply chain disruption, inflation and trade protectionism. Especially, raw materials directly affect the production and manufacture of the industry. Enterprises must always pay attention to the price inflation of energy and commodities. In addition, deputy chairman also stressed that the issue of carbon reduction should not be ignored, and revealed that far eastern group has listed energy conservation and carbon reduction projects as the focus of capital expenditure in the next year. Fan Qinzhi and Li Yuanzhen respectively reported the company's excellent performance on Sustainable issues and the performance of developing green materials. Everest textile Ching Lai Yeh president, who also belongs to the textile and fiber industry, also shared the process of Everest textile's successful transformation from loss to profit by building a digital main line platform and formulating five transformation strategies.

Asia Cement Corporation is led by K. y. Lee president to share the company's business strategy and development objectives. Then, Zhang Zhipeng's General Plant Manager (senior executive vice president) introduces the results of the company's diversified operation, and explains how Asia Cement Corporation is moving towards the goal of net zero emission through three major innovations in operation mode, products and technology. Coincidentally, Asia Cement Corporation (China) has also made a major breakthrough in green transformation. It uses industrial waste to replace some raw materials, which not only reduces carbon, but also saves cost, and implements enterprise sustainability development.

Due to the outbreak of the epidemic in Taiwan, 2021 will undoubtedly be a very hard year for the department store retail industry. Under the leadership of Nancy Hsu president, Far Eastern Department Stores made brilliant achievements during the anniversary celebration; On the other hand, the innovative wisdom of Far Eastern Department Stores Xinyi A13 has also obtained three patents. Tang Zhiya chief financial officer specially decrypts how Xinyi A13 connects and integrates information to build Taiwan's first smart mall. Facing the future of the new normal, Pacific SOGO Department Store Sophia C.W. Huang chairman put forward the clear goal of SOGO's deep cultivation and consolidation of market share, and invited Li Jingming, manager of Zhongxiao store and Ke Sijia manager to share the achievements of digital transformation and deepening marketing.

In terms of public welfare system, Far Eastern Memorial Hospital performed well in this year's epidemic war. President Qiu Guanming also recognized the importance of digital transformation and intelligent medical treatment. He not only set the three aspects of intelligent medical treatment in the post epidemic era, but also extended the service field through cross-border cooperation and talent training to create new value for Far Eastern Memorial Hospital. Yuan Ze University, represented by President JYH Yang Wu and Deputy R & D director Fang Shihao, shares the achievements of the University in promoting AI innovation and application, and looks forward to bringing more contributions to the industry and academia. After years of efforts, the Oriental Institute of technology was finally upgraded to Oriental Petrochemical (Taiwan) University of science and technology in 2021. However, president Huang Maoquan did not stop, but actively expanded production and learning resources and created a new pattern for the University; Dean Zhang Junlin also explained how the university can use digital technology to help students develop their potential and create talents needed by the industry.

In addition to mutual exchanges and learning among industries, in the face of the rapidly changing political and economic situation, it is even more necessary to accelerate the expansion of international vision, Therefore, section chief Erik Brynjolfsson of digital economy Laboratory of Stanford University was specially invited for the first time (Eric brin youfson), bringing the latest AI trends and insights through video, and reminding everyone that the way to survive in the AI era is to continuously embrace and apply new technology. The second stage invited President Guan Zhongmin of National Taiwan University to share the future trends of universities and talent cultivation. President Guan stressed that the channels and modes of talent cultivation should be more diversified, except In order to impart knowledge, we must also pay attention to technology and problem-solving ability. We hope that schools and enterprises will work together to create talents needed in the new era and create a win-win situation.

&nbspLooking forward to the future, the relationship between innovative science and technology and economic development is inseparable. Therefore, the conference held forums with global views and this week at two levels. The first forum was entitled "the great future of science and technology", led by Wei Guozhang, chief technology officer of MIH alliance, which explained that the key to the development of electric vehicles in the future lies in the openness and compatibility of programs; Wu Chengwen, senior vice president of Industrial Technology Research Institute, analyzed the development trend of Taiwan's high-tech industry under the two factors of "epidemic" and "international environmental protection treaties"; In view of the warming up of the Sino US trade war, Chen Huiming, partner of Juxin capital management, predicted the future pattern of the Sino US science and technology war and the semiconductor outlook in 2022 through a large number of charts. The second forum was entitled "the great future of global economy and trade", First of all, razen Sally, co-founder of European economic think tank ECIPE (razeen Sally) through video, associate professor explained that a new wave of protectionism has emerged in the global economy in the past two years under the covid-19 epidemic, and enterprises should rearrange their supply chain and reduce risks. Compared with Sally, Associate Professor Zhang Jianyi, President of Taiwan Economic Research Institute, is relatively optimistic that the global economy will gradually return to the level before the outbreak of the epidemic, but geopolitics and Sino US trade war will be more important Due to the impact of uncertainty in Taiwan, it is necessary to adjust the business strategy in time according to the emergency situation.

In addition to the rich courses, the conference also carefully plans new party programs. On the first day of the "dart wind party", the welcome party used American cuisine with intense and exciting team competition to stir up the atmosphere at the scene. The next day's "Far Eastern Group golden song night" specially invited the directors to bring classic songs with well-known singers such as Wei Zhe, fan Yiwen, Zhao Chuan, Wan Fang and power train. The epidemic situation also made everyone more aware of the importance of health. This year, professional coaches were arranged to lead the managers to carry out curve muscle strength training in the morning activities. At the same time, in the compact agenda, two activities, "Anping port yacht" and "yuanuniverse VR" were planned. The participating managers took luxury yachts to enjoy the scenery of Anping port and shuttle between the virtual and the real through the latest high-tech equipment, Experience metaverse.

&nbspAs Douglas Hsu said, the annual strategy meeting of Far Eastern Group is a time for affiliated enterprise companies to gather and exchange. It is expected that the directors attending the meeting can fully apply the knowledge accumulated in the meeting to their work fields and continue to "create a new situation and innovation bureau" for far eastern group.