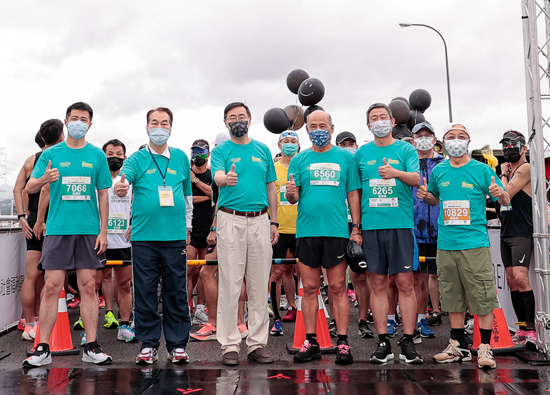 On May 15, the Taipei National Highway marathon, a face equity campaign, was launched. Far Eastern Electronic Toll Collection (FETC) as the first year major sponsor of the event, announced an increase on the day: FETC was originally promised to donate NT$1 in road safety for every kilometer the eTag owners runs and FETC expanded to all runners and shall use this donation to guard the minority group in the transportation.

Chang, Yongchang, the President of FETC, signed up for the 10K event. In addition to thanking the host Road Running Association for its invitation and the guidance of the Freeway Bureau, he also expressed his great gratitude to establish a link between healthy life and social welfare with road users. FETC adheres to the concept of corporate social responsibility and connects road running activities and road safety public welfare, and hope to call on more enterprises to respond and make minority road users safer. "

FETC colleagues formed the uTagGO cheerleading team and adopted a supply station to cheer up the runners. The main venue is also equipped with FETC and uTagGO stalls to encourage people to apply for eTag to withhold national highway tolls and parking fees, which not only practice environmental protection, but also reduce contact risks!