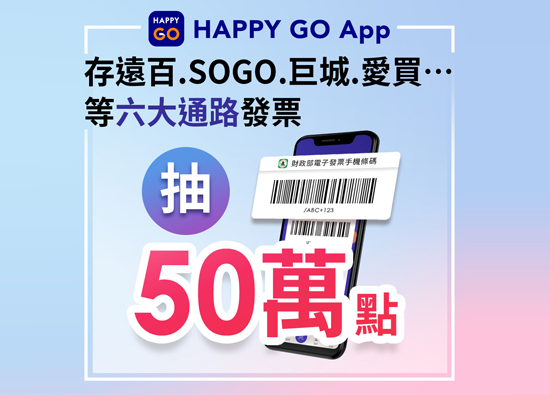 &nbspHsinchu has science and technology parks such as Zhuke, Taiyuan and hukou. In recent years, the population has been pouring in. With the arrival of Far Eastern Department stores, Zhubei store and far eastern big city shopping malls in Hsinchu, many potential local business districts have been developed. According to the go survey, the Zhubei business district, which is close to the science and Technology Park, has a high degree of customer digitalization, relies heavily on the Internet and app, and is interested in flash mob activity information and digital discount activities. Therefore, happy go, together with Hsinchu County Government and Far Eastern Department stores in Zhubei, organized the "mobile e start shopping cloud happy go" activity to encourage consumers to use digital convenient services and save invoices in the cloud, which is convenient and can enjoy multiple discounts.

In order to encourage people to use the cloud invoice function, happy go launched three preferential activities. First, it cooperated with the Hsinchu County Government. From now on to May 31, it bound "happy go pay" and "invoice mobile bar code" on the happy go app, consumed more than NTD100, and stored the invoice in the cloud, which was qualified for the lottery. Each invoice can accumulate one chance to win the prize. The awards include: popular Dyson vacuum cleaner, parent-child fun switch High end buffet Xuji meal coupon, Far Eastern Department Stores instant coupon... And other rich gifts.

In addition, Hsinchu County Taxation Bureau held a "one-day limited flash mob activity" at 2:30 p.m. on May 22 at the 7th floor of Zhubei store of Far Eastern Department stores. As long as the consumption is paid by action in the current month, and the consumption details of cloud invoices are stored, or the setting screen of invoice receiving account is completed, you will have the opportunity to take home the shopping gold, leather backpack, etc. of Far Eastern Department stores.

Moreover, in May, happy go app offered a lottery with a total amount of 500000 points, and deposited it into any cloud invoice consumed in the six designated channels (Far Eastern Department stores, Fe SOGO Department stores, far eastern big city shopping malls, city'super, a.mart, Ya Tung department store). You can draw 500 points (1000 in total). The more you save, the more chances you will win!