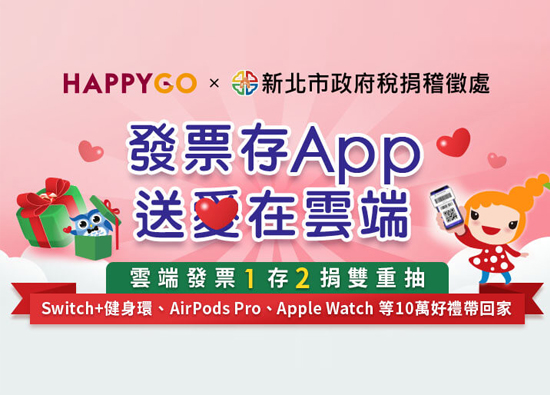 &nbspIn order to help public welfare groups get out of the severe winter of fund-raising brought by the epidemic, happy go once again joined hands with nine public welfare groups to call on tens of millions of cardholders in Taiwan to donate happy go points that will expire at the end of the year, or donate cloud invoices through the function of binding the invoice mobile bar code of the Ministry of finance through happy go app, so as to send warm and support vulnerable children at the end of the year. In order to thank cardholder for his love, the donation point has the opportunity to obtain the limited 2022 love calendar created by small artists from public welfare groups, and the donation invoice also has the opportunity to obtain awards such as switch + fitness ring, airpods pro, apple watch series 7, Far Eastern Department Stores gift certificate of 5000 yuan!

Happy go Ding & Ding management consultants joint marketing Liang Jinlin president said that since the establishment of the love donation point platform in 2007, she has established a long-term and stable public welfare cooperation relationship with nine public welfare groups, and can deeply feel the urgency and importance of transmitting love and social responsibility.

In view of the change donations and invoice donations of physical channel stores relied on by social welfare groups, people's consumption habits were affected during the epidemic. At present, the happy go app, which has exceeded 3 million downloads, has successively launched upgraded functions such as binding the invoice of the Ministry of finance, mobile phone barcode and donation invoice since the middle of the year, encouraging cardholder to use happy go pay more during the epidemic period, make peace with payment and zero contact, and save cloud invoices into the app and donate them to social welfare groups after consumption. In order to expand the promotion, happy go and the tax collection office of the New Taipei Municipal Government jointly organized the "invoice deposit app to send love in the cloud" lottery. From now on to December 31, anyone who uses happy go app to bind the invoice mobile bar code of the Ministry of finance, Vehicles that store cloud invoices in app during consumption (member bar code or mobile phone bar code of invoice issued by the Ministry of Finance), you can accumulate one lucky draw qualification for each storage. In addition to the grand prizes such as switch + fitness ring, airpods pro, apple watch series 7, Far Eastern Department Stores gift certificate of 5000 yuan, there are more than 100 awards such as 1000 yuan, 200 yuan, happy go points... And cardholder is encouraged to donate more invoices and win more prizes.