The year 2021 was a tumultuous year for the global economy with international trade strained by challenges on all fronts, including ever-changing variants of Covid-19, increasing inflationary pressures, the impacts of climate change, supply chain tensions, geopolitical risks and skyrocketing energy and commodity prices. Fearless of the capricious nature of our times, Far Eastern Group (FEG), which has remained on a stable footing under its overarching principles of sincerity, diligence, thrift, prudence and innovation over the past 73 years, has managed to nimbly adjust in the face of adversity and has again delivered good results. 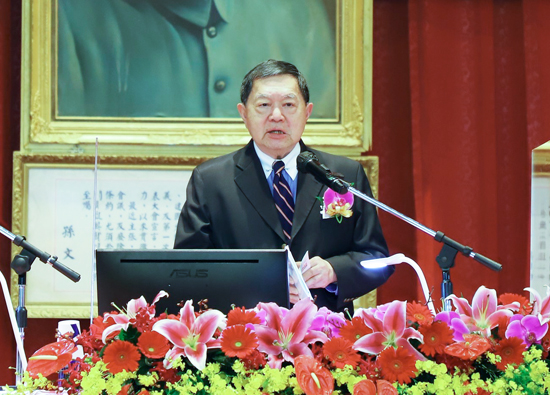 Following on the heels of the twists and turns of 2021, the year of 2022 isn’t short of major challenges. The pandemic still lingers, and the economic outlook is unpredictable. Politically, the war between Russia and Ukraine has sent oil and food prices soaring, exacerbating the global cost of living crisis. U.S. President Joe Biden has been experiencing a downward slide in approval ratings since he was sworn in, amidst recurring Covid waves and soaring inflation, whilst several recent and upcoming elections have increased political uncertainty in Europe. In Japan, in the midst of the fight against the pandemic, the new Prime Minister has introduced a new stimulus package aimed at reinvigorating the Japanese economy. In China, with emphasis placed on the importance of “Common Prosperity,” the authorities have also intensified oversight of industries, implementing a dual control mechanism under which targets for total energy consumption must be met, and strengthening its anti-monopoly supervision.

Financially, the global economy has been stuck in the quagmire of the pandemic for the past two years. A number of cities around the world have been in and out of lockdowns, and international borders have repeatedly closed and strict measures have been adopted to limit people’s movements. In Vietnam, for example, authorities ordered that factories comply with the “three on the spot” model, under which workers had to work, eat and sleep on the factory premises. As infections declined, control was slightly loosened with the introduction of “one route, two destinations” model, which restricted workers to their daily commute between home and work. Consequently, the shortages of labor and raw materials and a global port gridlock, which has caused long delays in supply chains causing corporations enormous challenges across the board. The U.S. consumer price index has soared to 10-year highs, increasing the risks of global inflation and giving rise to the U.S. Federal Reserve’s interest rate hikes. Oil and gas are being wielded as geostrategic tools, while energy and commodity markets have shown hyper-volatility. Meanwhile shipping costs have risen to their highest in history. In combination, the aforementioned factors are posing a grim challenge to business operations. Meanwhile, regional economic integration is taking on an increasingly important role in global economy and trade. The world’s largest trade deal, RCEP, went into effect in January 2022 and the CPTPP is intended to execute new strategies for regional economic integration (REI). As many countries scramble for membership, this regional market is growing exponentially in size with these developments underscoring the influence of REI on the future of global trade.

Environmentally, an international consensus has been reached on the need to curb global warming through carbon reduction. At the COP26 climate conference in the U.K., the attending parties agreed on a new deal to build upon the Paris Agreement. 130 plus economies around the world declared their ambitions to attain the goal of carbon neutrality. Action will be taken to mitigate the impacts of climate change with an EU carbon border adjustment mechanism implemented in 2023 and China’s cabinet releasing the “Action Plan for Carbon Dioxide Peaking” amid its efforts to accelerate energy transitions and reduce carbon emissions. However, China’s increasingly tightened power supply poses a great challenge to the country’s pursuit of energy transition and could also threaten to derail the revival of businesses and the global economy as a whole. The green economy and ESG investing continue to show great vitality. Energy conservation, carbon reduction and energy transition are not merely international trends, but what makes or breaks corporate competitiveness.

Digital technology, as it continues to advance, is bound to play a vital role in future development. Attention has been drawn to progress across a wide spectrum of areas, including AI, IoT, AR, VR, metaverse, 5G and EV. Businesses must harness the power of technological innovation and craft a future of intelligence and interconnection.

Political and economic uncertainty, along with degradation of the natural environment have brought a series of tests for businesses, accelerating the competition for survival. FEG has demonstrated its audacity in breaking the mold, shaping a new business model. Armed with a global mindset, an insightful vision, a repertoire of far-reaching and holistic strategies, and an insatiable desire for innovation and excellence, we will bring our A-game to the business landscape of tomorrow.

FEG’s diversified investment portfolio ranges from polyester, textiles, cement production, construction, department store retail chains, telecommunications, land and sea transport, to financial and banking services. Each company rises above competition in its own industry and has demonstrated solid growth. Far Eastern New Century (FENC) retained its leadership in the polyester and textile industry with a streamlined production chain, seized on business opportunities with innovative materials, created brand value with green innovation, achieved energy efficiency and reduced carbon emissions, devoted in ESG initiatives for sustainability, strengthened its operation with diversified investments, and enhanced the values of assets with its pragmatic approach to property development. Far EasTone Telecom (FET) ended 2021 with a growth in net profit from the previous year thanks to a substantial increase in revenue resulting from increased sales in mobile phones, consumer electronics, and telecommunication service bundles, and in addition a jump in the monthly fee for subscribers upgrading to 5G services. In addition, the strategic cooperation with Asia Pacific Telecom will be developed into a share swap merger to create a mutually beneficial situation. Asia Cement’s (ACC) overall earnings grew due to the record-high profits of the ready-mixed concrete, transportation, and stainless steel businesses in Taiwan. In the China market, ACC(China) experienced a growth in revenue arising from increased sales volumes and prices driven by growing demand for cement as the Chinese government pressed ahead with ambitious infrastructure programs. Far Eastern Department Stores (FEDS) has a well-established retail system and has been expanding its presence by building several mega shopping centers. FEDS Zhubei Store emerged after grand opening as the largest shopping center in Hsinchu. Oriental Union Chemical Corp. (OUCC) also enjoyed a significant growth in revenue in 2021 as economic recovery and increasing oil prices pushed up product sales volume and selling prices. Far Eastern International Bank (FEIB) posted an increase in net profit against the backdrop of a rebounding economy and plans to build an even more solid cross-border financial platform.

Founded with the concept of “developing industry while engaging in social responsibility”, FEG has engaged in businesses of public interest for well over a half century. The Far Eastern Memorial Foundation sponsors artist and cultural activities; the Far Eastern Medical Foundation funds medical research and provides social aid. The Far Eastern Y. Z. Hsu Science and Technology Memorial Foundation hosts the Y. Z. Hsu Science Award and acknowledges recipients’ achievements in three categories, namely Y. Z. Hsu Science Chair Professor, Y. Z. Hsu Science Paper Award, and Y. Z. Hsu Technology Invention Award, to promote research and development of science and technology in Taiwan. At the forefront of healthcare, the Far Eastern Memorial Hospital (FEMH) celebrates its 40th anniversary in 2021 with a multitude of notable achievements. It remains committed to continuous improvement in quality of medical attention and stands tall as an intelligent hospital and medical center equipped with state-of-the-art technology. It plans to set up a branch in neighboring Taoyuan City and build an intelligent healthcare system that will provide cutting-edge care for many years. At the worst of the Covid outbreak, FEMH spared no effort to safeguard the local community and contributed a great deal to pandemic control. In the field of education, Yuan Ze University strives continuously to become a world-class institute in higher education. It has established a college of medicine and nursing to undertake innovative research in medicine and train more professionals for healthcare services. Oriental Institute of Technology has been upgraded and renamed Asia Eastern University of Science and Technology. It aims to develop itself as a vocational university that strikes a balance between technology and humanities education, valuing both theory and practice and preparing outstanding professionals for industry.

Facing an ever-changing competitive landscape, FEG responds dynamically to changes in the business environment and makes necessary adjustments in a timely manner. Moving forward, we will continue to maximize our core competencies, including agility, flexibility, endurance and sustainability, utilize AI technology flexibly and optimize our digital capabilities. FEG is poised to grasp opportunities in the new era and write another chapter of success as a prosperous and sustainable role model in the business world. (Abstract from Business Report of FENC 2022 Annual General Shareholders’ Meeting)