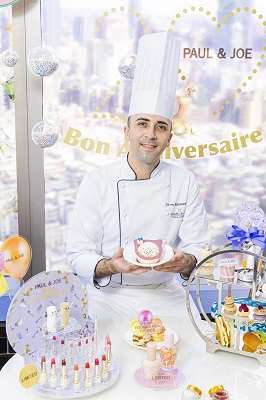 &nbspFor the first time, Far Eastern Group Shangri La Hotel in Taipei cooperated with the famous makeup brand Paul & Joe. From April 2 to May 29, it launched a weekend Limited "romantic Paris afternoon tea" in the Marco Polo lounge on the 38th floor. The French dessert chef Hu Mengyang selected the ingredients, added the design of lovable totems such as cats and cat paws, and combined the romantic purple style of Paul & Joe's 20th anniversary of French makeup to change various exquisite desserts and salty foods. Enjoy afternoon tea during the event and receive an exclusive "Paul & Joe small champagne star four gifts" (worth 1770 yuan). During the continuous holiday from April 2 to 5, it will be supplied every day, with NT $1450 per person plus 10% service charge, including 12 special desserts, salty points and a glass of pink sparkling wine. Reservation is required in advance. 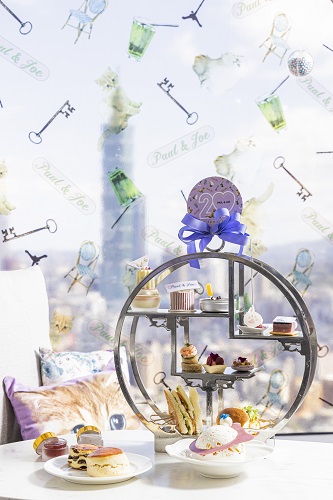 &nbspRecommended refreshments by the chef of "romantic Paris afternoon tea" in Marco Polo lounge include:

Mini salty point with French classic dessert macarone! In response to the romantic purple style of the 20th anniversary of Paul & Joe French make-up, the chef specially selects purple macarone, applies a layer of paste made of goose liver and cream, and then puts diced duck meat and avocado. When he bites it, he immediately feels the density and smoothness of duck liver and the delicate taste of macarone.

With fluffy and soft biscuits, containing beetroot cream rich in iron, phosphorus and potassium, and decorated with purple pickled vegetables, it is a delicious and exquisite exquisite salty point.

The main body of the dessert is wrapped in pink Ruby chocolate. The first layer of the filling is almond dakwaz, which is crispy and soft inside, and the second layer is raspberry jelly intertwined with sour and sweet. The bottom layer is added with crispy biscuits. When you bite it down, the sweet flavor stacked layer by layer is memorable.

&nbspBRET, also known as French pudding tower, is a classic item in French dessert. It tastes dense and soft. It is added with a layer of peach jam to create multiple flavors. It is covered with ruby chocolate and white chocolate. On the upper layer, there is a sweet surprise bag made of white chocolate, which contains chocolate beans, marshmallows and nuts. Each bite is full of gorgeous surprises.

Based on the shape of lollipop, the round white chocolate is wrapped with rich and charming black chocolate cognac, and then stained with sour and sweet cherry syrup, which makes people addicted as soon as they eat it.

The origin of lemmington cake is actually a beautiful mistake. At the end of the 19th century, Baron lemmington's kitchen accidentally dropped the cake into chocolate sauce. In order to make up for the mistake, the kitchen had an idea and spread coconut filaments on the outer layer of the cake. The Baron ate it with praise, and lemmington cake was born. This spiced coconut lemmington uses mango and spiced jam. It can not only eat the rich aroma of chocolate, but also eat the fresh and sweet fruit.

Use Ruby chocolate and white chocolate to make red and white straight lines. It's 100% cute just looking at the appearance! The inner layer of fernan snow brick cake has the charming aroma of hazelnut, almond and coking cream. With the soft cake body, it creates a multi-level taste. At the same time, the mood is also very colorful.

Take the q-elastic and smooth coconut milk jelly as the main body, add raspberry jam, then decorate it with strawberries and diced bread, and finally cover it with a layer of reticulated white chocolate, and then use Ruby chocolate to make super cute cat modeling makeup. It is definitely a delicious and photographed beautiful dessert!

The price of "romantic Paris afternoon tea" is limited at the weekend: 1450 yuan per person, including a glass of pink sparkling wine, and 300 yuan for the second cup; In addition, you can buy a glass of Maison Veuve Clicquot French Kaige champagne at an increased price of 450 yuan, and you need to add 10% service charge for all the above

Marco Polo lounge reminds you that minors are not allowed to drink or drive, which is safe and secure.