Breaking through the stereotype of production transmission, Asia Cement Corporation enjoys common prosperity with the environment 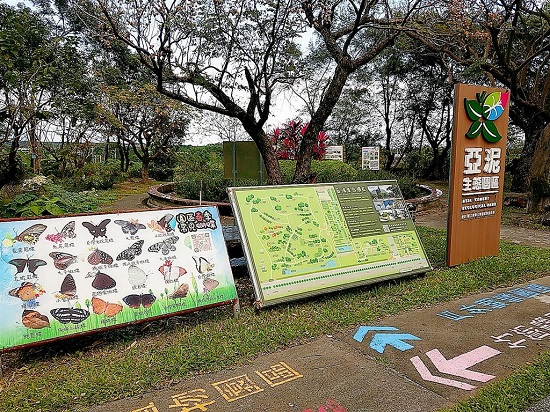 In recent years, due to the rising awareness of environmental protection, cement plants inevitably bear the original sin of high carbon emission and high energy consumption, but many people ignore that "cement" is actually an indispensable existence in life. Asia Cement Corporation faces fate but refuses to accept it. It tries to subvert the external impression of traditional cement and tells the society with professional technology that the integration of cement plant and environment is infinitely possible!

On the Taiba line, riding a bicycle to the direction of Taroko, the breeze is gentle, and occasionally a few pieces of Phoenix fallen leaves fall. The Hualien plant of Asia Cement Corporation is located on the left side of the road. It produces all kinds of raw materials needed for major construction, such as bridge building, road paving, house building and so on.

"Wow! This butterfly looks like a dead leaf!" "It stops on my clothes and is not afraid of people." "Do you know, children? Butterflies actually have their own solar receiver on their wings!" 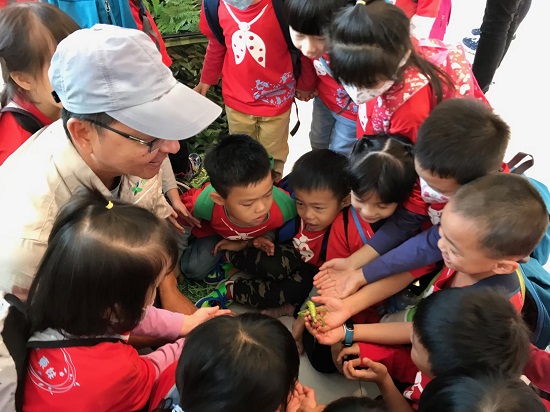 Before the outbreak of covid-19, the dialogue between the above tourists and tour guides was the daily work of Asia Cement Corporation ecological park. The ecological classroom, which covers an area of more than one hectare, is not as fancy as the general amusement park area, because it is arranged and planted in the mode of "restoring nature", so as to avoid excessive artificial development and affect the ecological development.

Located directly opposite the Hualien plant of Asia Cement Corporation, the ecological park of Asia Cement Corporation is planted with about 250 species of Taiwan native} plants, more than 10 kinds of bamboo arthropods and re breeding, including the national third-class conservation butterfly "Phoenix butterfly", with a total of 35 species of butterflies. Zhang Zhipeng, deputy general manager and General Plant Manager (senior executive vice president), said: "Taiwan is the kingdom of butterflies. We can't live up to this reputation. With a mission and enthusiasm for ecology, the guides and teachers of Asia Cement Corporation ecological park go to the mine from time to time to investigate, collect local butterfly species and bamboo arthropods, and assist in reproduction and reproduction, so that all the people who visit the park can get close to and learn from the university without going up the mountain and down the sea."

According to the latest statistics, from the beginning of 2020 to may 2021, there were about 100000 people in the park. Now, due to the epidemic, the opening to the outside world has been suspended. However, in order to break through the time and space constraints of ecological education, Asia Cement Corporation edited the live life of animals and plants in the park into informative short videos every week, put them on youtube and Facebook, and let people learn ecological knowledge through the Internet. After nearly a year, The cumulative number of hits has exceeded the million mark.

Xiong Fansheng, former president of the society of wilderness Hualien Branch, once mentioned that "butterflies, bamboo arthropods and many native plants can survive near the factory, which proves that Asia Cement Corporation ecological park is a good field, clean and free from enemies."

Asia Cement Corporation hired LAN Zhenfeng, who used to be a biology teacher in middle school, as an ecological expert. He also played an important role in this ecological tour exhibition, because during the exhibition, the transportation distance, display environment, temperature and humidity regulation, and the supplement of the amount of herbivores... All have to meet the survival needs of bamboo arthropods. Teacher LAN focuses on all the details and does not allow any omissions, It is to avoid discomfort caused by "leaving home".

Tan Wenzheng, an ecological commentator, recalled the time when he accompanied the bamboo insects around the island and said with a smile, "people and insects are tired, but seeing so many friends, big and small, is not enough. Everything is worth it!" He did not deny that during the exhibition, he also met people who had misunderstandings about Asia Cement Corporation, but after rational communication and detailed explanation, and seeing Asia Cement Corporation's efforts in ecological education with his own eyes, they all reversed their prejudices one by one, "this should also be an unexpected gain!"

The Industrial Development Bureau, Ministry of economic affairs once mentioned that Asia Cement Corporation Hualien plant is a "model student of low-carbon process energy conservation" in the special issue of "collection of typical cases of low-carbon green process in energy intensive industries" published in October 2017. It affirmed Asia Cement Corporation's long-term commitment to promoting green production process and reducing environmental impact with a length of up to 9 pages. What makes Asia Cement Corporation even more proud is that in early 2021, Asia Cement Corporation officially passed the review of the international strict science based targets Initiative (SBTI), becoming the fourth cement company in the world to complete the setting of carbon reduction targets and specifically respond to the global climate control temperature rise below 2 ° C (well below).

SBTI is jointly initiated and established by the Carbon Disclosure Project (CDP), the United Nations Global Compact, the world resources R & D Center (World Resources Institute) and the World Wildlife Fund to promote enterprises to adopt a more scientific way to achieve energy conservation and carbon reduction based on controlling the total carbon emission of the global warming trend within 2 ° C. Asia Cement Corporation's scientific reduction commitment is to set 2019 as the base year and promise to reduce the emission intensity of cement cementitious materials in Category 1 and category 2 by 8% by 2025, including Taipei head office, Hsinchu plant and Hualien plant, which is equivalent to reducing greenhouse gas emissions of more than 258000 tons.

The Hualien plant of Asia Cement Corporation can produce 100000 bags of cement a day. Zhang Zhipeng, deputy general manager and senior executive vice president, said: "for cement plants, as long as carbon emissions are low, they can improve their competitiveness!" In order to implement the carbon reduction target, the Hualien plant of Asia Cement Corporation launched two major action plans. One is to actively promote the recycled economy and reduce the use of natural minerals and fuels. Instead, high calcium content wastes or by-products calcined in other industries are used as alternative raw materials and biomass containing wastes are used as alternative fuels; First, in the manufacturing process, through scientific actuarial calculation, adjust the proportion of limestone and reduce the use of clinker with high carbon emission. Taking the international ASTM c595 hydraulic mixed cement standard as an example, the upper limit of limestone in cement is 15%. At present, some exported cement of Asia Cement Corporation has been produced with reference to international standards, which is in line with the global trend of energy conservation and carbon reduction. 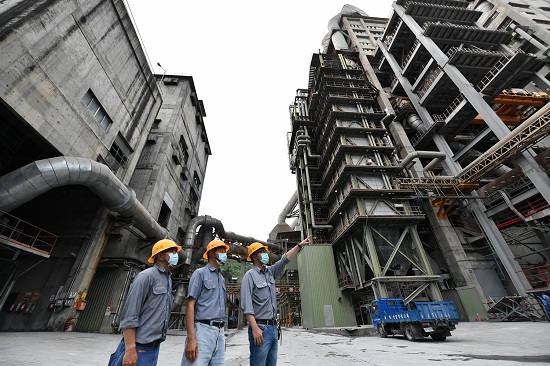 Asia Cement Corporation, in addition to continuously developing low-carbon process technology in the stages of mining and production, is also not careless about energy conservation and carbon reduction at the transportation and marketing end. In the middle of 2021, it was announced that the cement ship all shore power project would be completed independently. In other words, during the period when the cement ship of Asia Cement Corporation docked at the port, the ship generator would no longer be used for power supply, but all the power supply of Taidian on shore would be used. In this way, it would not only save more than 1474 tons of ship oil per year, but also effectively reduce 5329 tons of carbon dioxide emission, which is an initiative of Taiwan's cement industry.

The shore power project of Asia Cement Corporation is in line with the concept of green harbor promoted by the government and is also the trend of global port transformation. As soon as the news came out, nearly 120 international media reported it. Yang Mingqin, Department factory manager of Asia Cement Corporation Hualien factory, said, "the theory seems simple. When it is really implemented, it is found that challenges are one after another." Including the tidal range of the port, the scope of the wharf, the power supply design specifications of different ships, as well as the shipping schedule and weather cooperation of each ship. The construction is extremely difficult. Fortunately, the team of Asia Cement Corporation overcame them one by one and developed all by itself from design, supervision and commissioning. Also because of this technical autonomy, Asia Cement Corporation can still carry out the all shore power project of cement ships during the covid-19 epidemic, Completely unaffected.

Yang deputy factory manager also explained that after verification, Asia Cement Corporation's shore power engineering system can not only reduce the emission of air pollutants such as carbon dioxide, sulfide and nitrogen oxide, but also greatly improve the unloading efficiency of cement ships and shorten the unloading time by 50%; In addition, the shutdown of all generators can reduce the operation wear and prolong the service life of the equipment. Most importantly, this unique technical capability is not only applicable to the cement ship of Asia Cement Corporation, but also can be extended to other shipping industries in the future. We can work together to implement a low-carbon green harbor.

Cai Youji, the public relations manager of Asia Cement Corporation, recalled the most impressive scene. "Before the vote, the public relations colleagues of the head office and the aboriginal colleagues of Hualien factory explained the relevant contents to the residents door to door. Even after work, everyone still got together to discuss. They were concerned about which neighbor didn't explain clearly enough and which family needed more effort." He also said: "in addition to the wholehearted sprint of front-line colleagues, the strong support provided by all the executives of the head office and Hualien factory is also an important factor to pass the vote." The consultation and consent process has become a model case for enterprises to respect indigenous peoples, causing peers to follow up and learn.